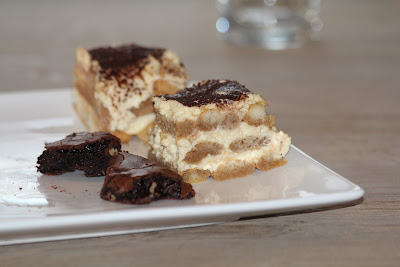 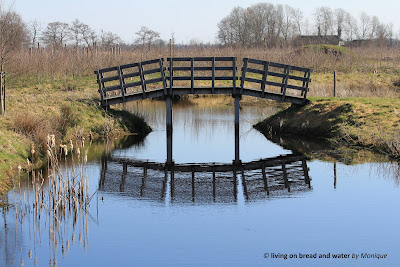 Spring is in the air

After a long lasting winter ,trees are getting blossoms and in the herb garden chives are coming up as green as green can be.Ready to find its way to the kitchen and into this month bread. Potato bread with chives .Our kitchen of the month princess Sara at I like to Cook asked us to bake this. And believe me , it tastes much better than it sounds. You need some leftover ¨potato´s and soymilk but just normal milk will do as well. And a bunch of chives.Its a real spring bread ´cause it rises as high as the weeds in my garden are growing at the moment.Full of life !! 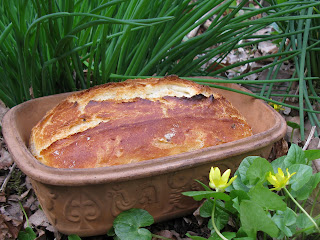 It was easy to make and bake and so good!!!!!
The little greens of the chives were hardly visible in the sandwiches Nice, because they don´t eat stuff here with green in it.But they gave a great taste .
Next time I chop larger pieces so it will be seen and the bread wil be all mine, haha.
Sitting in the early morning sun in a spring garden eating this for breakfast....or in the eveningsun eating this bread with a bowl of springonion soup......Makes me so happy and makes me forget that long long lasting winter. 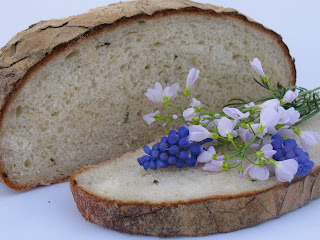 If you want to bake your own spring bread and want to become a bread baking babes´buddie please find the recipe at Sara´s kitchen .I don´t have time to give it to you , I have a battle to fight here....with all those fast growing weeds that are taking over my garden.Any one having a recipe for that???? 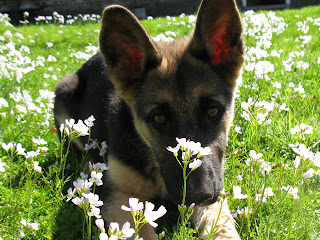 The reason for posting late , this month.... 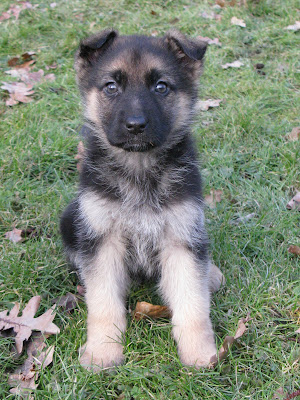 Born dec. 31 '09 and moved over to our house a few days ago.
She , our little German shepparddog , still has no name , or 5 'cause every member of this family wants to name her differently. So if you can come up with a name we all agree, she will be very happy.And so will I.

Oh ,but this post was supposed to tell you about this month BBB's bread.
Well it was good , it was fun and it was tasty.
But keep it to the sweet fillings , goath-cheese and sweetbread don't match , I think. Chocolat like Nutella will do perfect, fat and tasty, instead of pork fat....
What this is all about ?

It's called Ensaïmada and it's said that the origin dates back to the 17th century. Ensaïmadas are made in a lot of Spanish speaking countries, Spain obviously but also the Philipines and Puerto Rico.And now here at BBB's 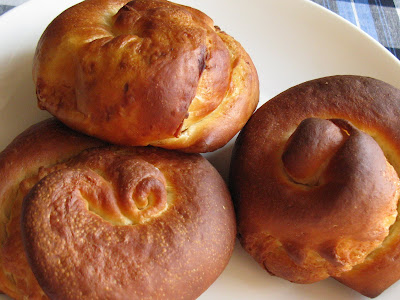 My dear friend Karen of Bake my Day found this recipe for us.She's the kitchenQueen of the month and for further information you have to go and ring her doorbel.Give her my love and many thanks.
It was a great to do challenge.
Ï'm off to bake dog-bicuits now... 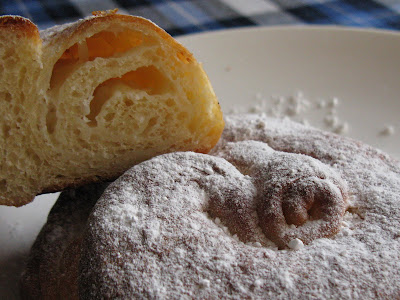 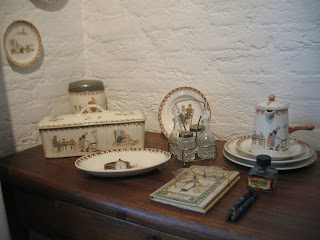 A new blog is born

Sad to say it's in dutch...
But I'll tell you about it. It 's all about a french china , very old ,from a little town , Sarreguemines in France. The name is Enfants Richard and probably the illustrations are from Kate Greenaway , an English writer of children's books in that time. 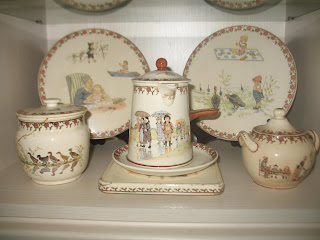 It's in my family for ages .It was there allready ,as far as I know ,in 1925 when my mother was born. When my brothers and I were little ,we loved when the pancake plate and the the sugar pot and so where used. Each of the pieces has memories , things to tell and each picture has its own story , told by my Mam when we where kids. Dear dear memories. There where no plates left and that's why I started collecting .Now a days I'm trying to find all kinds of items to make it complete.Thats what I'm telling about in my Blog . And if any-one of you has some of that china hidden under the bed....you know where to find me!
In the mean time , take a look at my new blogspot if you like :

There also are pictures of other collectioners , so don't think that big big cupboard is mine. Wish it was....
These are mine : 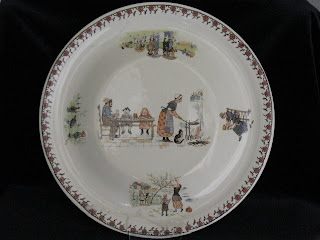 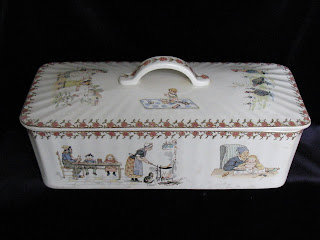 Cute isn't it ? Worth telling about !!
Gepost door Monique 2 opmerkingen:

The most colorfull food in the world is , as far as I know , the Indian Kitchen. Which I'm very fond off. Like my husband. To tell you the truth , we stop the car when-ever we see an Indian restaurant around dinnertime.Or almost dinnertime. Or whenever it is open....
We made several recipes at home ,but I never tried the breadbaking side of this kitchen. Bad BreadBakingBabe !!
But Lynn , breadbakingbabe-kitchen-of-the-month-host gave us a recipe of Naan , the indian bread.
As said "naan really can't be made at home because traditional naan is made by in a specially made, super hot brick oven " , Lynn found us a recipe that's really worth trying.The recipes come from Paul Hollywood's 100 Great Breads.
And I baked them on a hot baking stone in my stove.
To be honest , the plain "naan" was good.And simple to make.
And the "curry naan" I made only because it was in this challenge.
Guess what...it was GORGIOUS , GREAT , DELICIOUS !!
The mango-chutney and the raisins turned it into a color-full taste.
So don't spoil any time reading this post.
Run to Lynn's kitchen table and start making "Naan".

And give Lynn my love and thanks ! 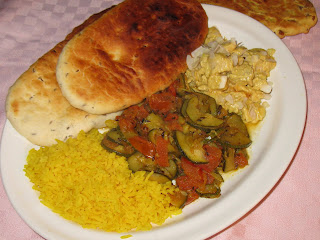